The Nizwa Fort is the biggest castle in Nizwa, Oman. It was built in the 1650s by the second Ya’rubi Imam; Imam Sultan Bin Saif Al Ya’rubi, although its underlying structure goes back to the 12th Century. It is Oman’s most visited national monument. The fort was the administrative seat of authority for the presiding Imams and Walis in times of peace and conflict.

The main bulk of the fort took about 12 years to complete and was built above an underground stream. The fort is a powerful reminder of the town’s significance through turbulent periods in Oman’s long history. It was a formidable stronghold against raiding forces that desired Nizwa’s abundant natural wealth and its strategic location at the crossroads of vital routes.

The fort’s design reflects the Omani architectural ingenuity in the Ya’rubi era that witnessed considerable advancement in military fortifications and the introduction of mortar-based warfare. The main part of the fort is its enormous drum-like tower that rises 30 meters above the ground and has a diameter of 36 meters. The strong foundations of the fort go 30 meters into the ground, and a portion of the tower is filled with rocks, dirt and rubble. The doors are inches deep and the walls are rounded and robust, designed to withstand fierce barrages of mortar fire. There are 24 openings all around the top of the tower for mortar fire.

Two cannons guard the entrance to the fort which opens into a maze of rooms, high-ceilinged halls, doorways, terraces, narrow staircases and corridors. Four cannons remain on the tower’s top, down from a total of 24, which once served as the fort’s main firepower. They provided complete 360-degree coverage of the countryside around making it virtually impossible for a surprise attack on the fort without provoking a reply from the cannons. One of them has the name of Imam Sultan bin Saif engraved on it. 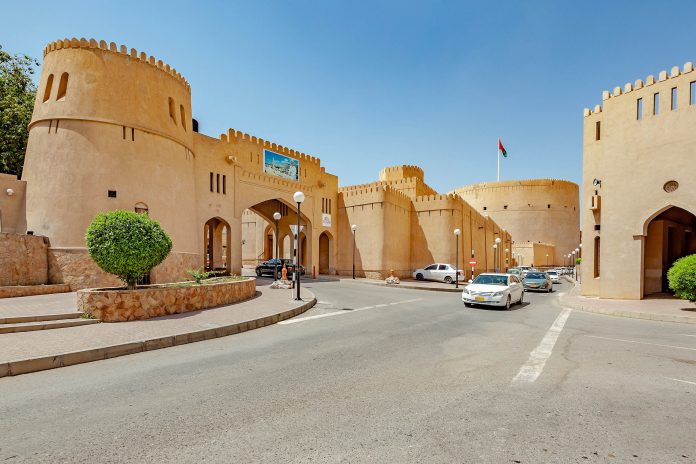